There are 9 series that have recently been designated with curated status:

Voxel Monkes is a foundational 3D animated series on Solana by Adam Ape. Nearly complete, Voxel Monkes will consist of 75 pieces of animated iconic moments and figures built on the classic monke silhouette.

Illustrator Ben Bauchau creates standalone stories in strange and surreal environments. With Lost In A Place, the artist explores his emotions, unconsciousness, and imagination.

In Typestracts, Degen Poet moved from straight poetry to abstract compositions. He continually innovates with this series, creating over 90 works and including collaborations with other artists. The artwork is typically created with a manual Olivetti typewriter, permanent marker, and various kinds of paper.

With the launch of The First Edition, John Lê created a paradigm shift, bringing new collectors to the fine art ecosystem. This piece is his first edition and has been wildly successful.

In Futuristic Cashew, illustrator José Narciso uses a comic book style to explore the world after an environmental collapse. This series consists of 1/1s as well as editions.

In Synergy, artist Lisanne Haack paints digitally in a style that resembles oil painting as well as charcoal and pastels. In a fascinating departure from physical art, she varies the texture of the support between canvas and paper. Haack cuts, pastes, reworks, and repeats sections, utilizing and creating various digital tools. In the second half of this series, Haack draws color inspiration from significant paintings by modern artists.

With Photographic Abstractions, Sir Wayne Nooten created an entirely new type of artwork - abstraction from straight photographs. The artists began with his photos of a crowd of people, and digitally edited and abstracting them, introducing colors, forms, and shapes. The overall aesthetic of the artwork various, from brushstrokes, to hard-edge, to looser shapes.

Sleepr is is a superflat artist who uses vibrant colors and chaotic compositions to produce dreamlike imagery from personal visionary experiences. In the Exotic series, loose, abstract forms unfurl across imaginative scenes, seamlessly blending landscapes with figures in this unique aesthetic.

Utopia is a neo-surrealist, self-taught artist whose work is automatic and entirely unplanned. Historically significant, The G Series is his main body of work that explores dark and otherworldly themes. 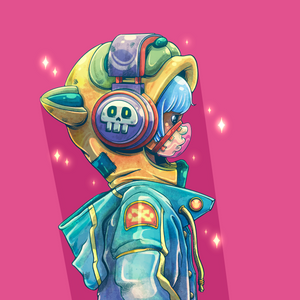 
The Evolution of Painting 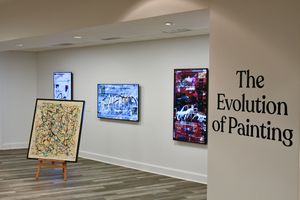